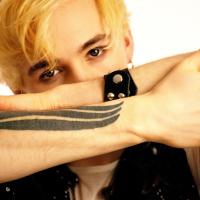 Andrew Cassara is a Canadian-born Pop/Rock recording artist from Ottawa, Ontario. Together with his management team at SGMGroupArtists, Andrew has been developing his talents with great devotion and an unwavering work ethic.

Since 2013, he has consistently released new music while performing live both domestically and internationally. He has developed a very strong presence online, and with a significantly engaged social media influence, he is establishing an ever-growing worldwide fan base.

Andrew has a brand-new full length (factor supported) album releasing in May 2020 entitled “Freak On Repeat” The first single “Bad Bad” will be dropping on March 27th.

In 2018. Andrew headlined the Youth X Canada Tour, this was a unique project designed to discover, explore and celebrate the diversity of Canada’s cultural and musical landscape, visiting youth centres across Ontario. This included performances, but the mission was to encouraging youth to share their mental health stories and talk about issues facing their communities. Andrew was key in sharing his own stories and taking a leadership role in connecting with youth in “circles” designed to encourage communication. Andrew still supports the organization and plans to be available to continue the work with Youth Centres Canada in this very valuable initiative.

Over the span of 2018-2019, Andrew did performances all over the world, including South Korea, Singapore, Japan, Sweden, The United States and Canada. He and his live band performed showcases, festivals, clubs, and attended some of the biggest conferences. Andrew has shared the stage with a number of prominent artists, including Shawn Mendes (Ottawa Bluesfest), Chromeo, Tyler Shaw, Lauv and New City. The result has been the fast development of his emerging career as a performing artist. With the recording of a new album, an engaged fan base, and an entrepreneurial approach to building on all of the national and international momentum, Andrew is poised to make some noise in 2020-2021.

With support from Factor, The Canada Council of the Arts, The SOCAN Foundation, The Ottawa Music Industry Coalition, The Canadian Embassy in Japan, and a multitude of private companies, Andrew has won the support of his community and his team continues to push the boundaries of what is possible for Andrew and his music.

2018 saw the signing of a distribution and marketing deal with a prominent Korean record label (Sound Republica), worldwide distribution through SGMGroupArtists/AWAL, and upcoming agreements for the Chinese market through Ernest/Tencent Music Entertainment.

To date, Andrew has released a full-length album entitled “The Big Bang”, a compilation album featuring all of his single releases from 2013-2017.